Also on Wednesday 19 September, Republic of Singapore Air Force (RSAF) Lockheed C-130H Hercules '735' arrived at Rockhampton Airport as "SAF9853" from Darwin where it arrived from Singapore the previous day. 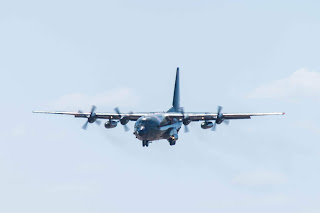 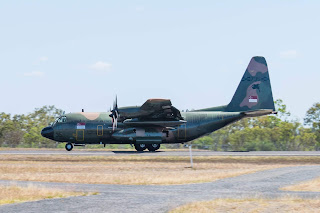 Jason M from J.M Photography was able to capture a couple of photos as the Herc touched down and then was parked on the Northern part of the Rockhampton Airport parking apron, alongside two of the four RSAF Boeing CH-47D Chinook helicopters.

There reportedly will be an RSAF Herc based at Rockhampton Airport during Exercise Wallaby 2018 - it is unclear at this stage whether '735' will be the one or whether it has simply brought equipment into Rocky for the Exercise.  At the time of writing '735' remains at Rockhampton Airport.

All photos taken by Jason Miller  ©
Posted by Damian F at 9:04 PM