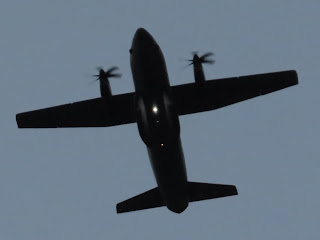 It flew up from RAAF Bast Richmond in New South Wales and completed a missed approach onto Runway 15 at Rocky before it continued to the North towards Mackay and then Townsville.  A34-007 was heard to be using the radio callsign of "Kaos 05".

The Alenia C-27J Spartan is a military transport aircraft developed and manufactured by Alenia Aermacchi (Leonardo’ Aircraft Division).  The RAAF recently took delivery of its tenth and final C-27J Spartan battlefield airlifter after they were ordered by in May 2012 to replace the now-retired De Havilland DHC-4 Caribou fleet.

2017 marked the 75th Anniversary of the RAAF's 35 Squadron and fellow C-27J Spartan A34-006 spent many days operating out of Rockhampton Airport during the recent joint Military Exercise Hamel 2018 and was spotted wearing a special Orange Wallaby tail stripe reminiscent of the Squadron's Caribou markings carried during the Vietnam War when it was affectionately known as 'Wallaby Airways'. 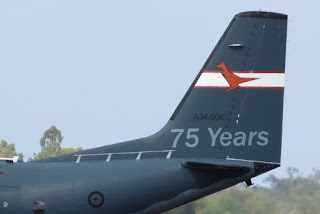 Sincere thanks to local plane spotter Kayanne H who was at the right place at the right time to capture these photos!