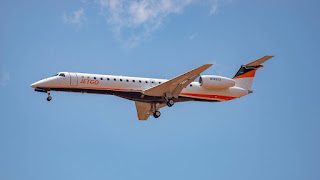 It flew from Brisbane to Townville and then Darwin (where it is pictured) before it continued overseas to Balikapan (Indonesia).

The Embraer was originally delivered to JetGo in Brisbane in April this year and was due to be registered VH-JGK.  It never wore this registration marking and instead sat idle on the General Aviation (GA) Apron at Brisbane Airport.


In June this year, JetGo Australia Airlines was placed in voluntary administration and suspended all regular public transport (RPT) flights.  Closed Fly-in Fly-out (FIFO) charter flights continued for a short time although these also ceased.  The move to appoint voluntary administrators came after Dubbo Regional Council took legal action in the NSW Supreme Court to recoup what it said were unpaid debts totalling some $270,000.