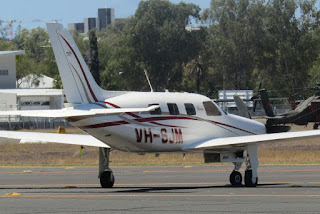 After a couple of hours on the ground, VH-SJM returned South to Glen Innes and then Toowoomba.

Meanwhile, also on Wednesday 19 September, Hawker Beechcraft G58 Baron VH-EZD was noted arriving into Rockhampton Airport from its Monto base.  It later departed to the Sunshine Coast.

And Beech A36 Bonanza VH-WDG popped into Rockhampton Airport from its Chinchilla base.  It then departed to Hervey Bay (Fraser Coast) Airport before returning to Chinchilla.