An interesting bizjet to pop into Gladstone Airport on Wednesday 26 September was Victorian-based but American-registered Embraer EMB-505 Phenom 300 N227SL. 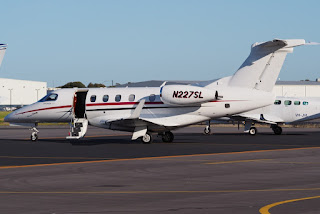 N277SL has had a busy week of flying - it is pictured above at Adelaide Airport on Monday 24 September - and on Wednesday, it arrived into Gladstone Airport from Sydney and the Sunshine Coast.  It then departed to Alice Springs in the Northern Territory.

Meanwhile, also calling into Gladstone Airport, also on Wednesday 26 September, was Corporate Aviation Bell 429 helicopter VH-EQP.  It arrived from its Southport base and continued to Hamilton Island Airport where it appears to be staying for at least the night.

Of interest, also visiting Hamilton Island Airport this week was the familiar sight of Balmoral Air Dassault Falcon 2000LX bizjet VH-WIO.  It arrived from Bankstown on Tuesday 25 September and returned to Bankstown on Wednesday 26 September.

I believe that Brisbane-based Cessna 525A CitationJet2 bizjet VH-MOR is still parked at Hamo after arriving there from Archerfield via Rockhamption Airport on Monday 24 September - see Blog post below.

Finally, also on Wednesday 26 September,  Australian Maritime Safety Authority (AMSA) (Cobham SAR Services Pty Ltd) Bombardier CL-600-2B16 Challenger 604 bizjet VH-XNF "Rescue 550" was due to call into Mackay Airport on a flight from Melbourne (Essendon).  The Challenger passed Bundaberg and flew out to sea for a short time before it turned around and returned to Essendon.