Over the latter part of this week, Alliance Airlines Fokker F-70 VH-JFB was noted visiting a couple of Central Queensland Airports with it noted wearing a new sticker on its forward port-side adverting an upcoming charity concert by iconic Australian rock music singer-songwriter, Paul Kelly. 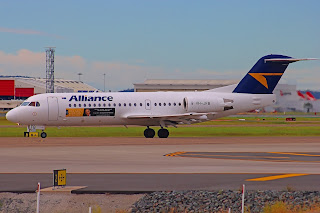 VH-JFB is shown above departing Brisbane Airport early on Saturday 20 February.  It appears to have emerged from the hangar with the sticker during the middle part of this last week and has visited both Gladstone and Moranbah Airports since then.

The 'Paul Kelly and Friends' Concert is a locally organised fundraising initiative hosted by the Dirranbandi Pastoral and Agricultural Association. This event will raise much needed funds that will ensure the sustainability of opportunities to access future pathways in Agriculture for the local youth in this region and beyond. As a small, rural community, Dirranbandi is committed to giving their youth every opportunity possible to develop knowledge, skills as well as gain experience in local industry.

Several acts including Paul Kelly, Ian Moss, Kasey Chambers, The Wolfe Brothers, Hope D, and many more are expected to perform on the night.
For more information, visit   http://www.paulkellyandfriends.com/
Tickets are on sale now through   https://outbacktickets.com.au/