Early on Tuesday 23 February, the visiting pair of Royal Australian Air Force (RAAF) Beech B350 Super King Air turboprops were again spotted parked at Mackay Airport after spending the night on Western General Aviation Apron (WGA).  As posted below, the two Super King Airs were identified as A32-675 "Hudson 33" and A32-651 "Hudson 05". 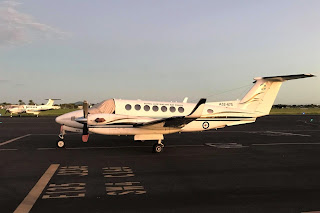 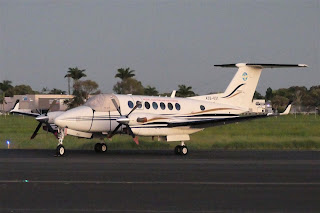 Later on Tuesday, both Super King Airs departed Mackay Airport for the North, with both looking to land at Proserpine (Whitsunday Coast) Airport for a period of time.  They then continued up to Townsville with A32-675 "Hudson 33" landing and A32-651 "Hudson 05" completing a missed approach.
Both aircraft then headed to Cairns where they landed and look to be staying for at least the night - as shown below. 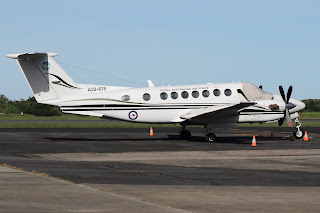 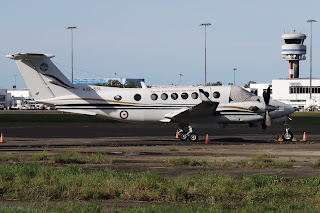 UPDATE!  On Wednesday 24 February, both A32-675 "Hudson 33" and A32-651 "Hudson 05" continued from Cairns to Mount Isa and then Alice Springs for another overnight stop. I presume they will end up back at the East Sale base by the end of the week - a great adventure!
Meanwhile, also on Tuesday 23 February, the other visiting RAAF Beech B350 Super King Air A32-426 "Beaufort 30", departed Townsville for  HMAS Albatross at Nowra and then RAAF Base East Sale.
As posted below, A32-426 "Beaufort 30" was joined by A32-437 "Beaufort 36" on Monday 22 February, with both Super King Airs flying up from HMAS Albatross to Townsville, and then the latter heading home to East Sale via Roma Airport.
Sincere thanks to the local plane spotters for taking the to capture and send through these great photos from Mackay and Townsville Airports!
Photos taken by 'JM' and Jonathan Williams  ©
Posted by Damian F at 9:25 PM