On Friday 26 February, REM Falcon / Flight Options (Australia) Dassault Falcon 2000EX bizjet VH-EWB was photographed as it called back into Mackay Airport. This is the second visit in the last couple of days by the still quite new Falcon 2000EX bizjet. 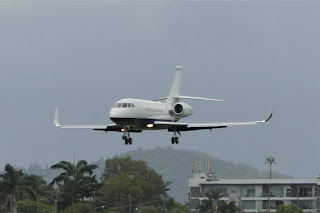 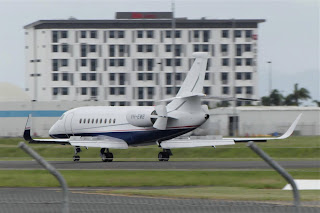 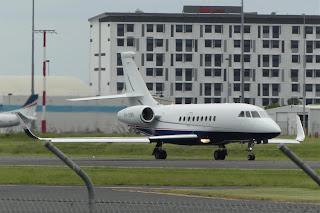 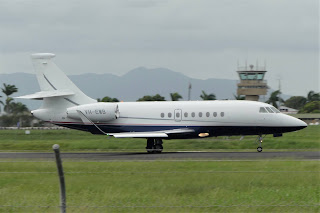 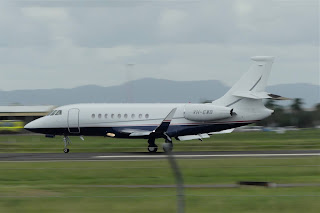 On this occasion, it looked to arrive from Cairns and depart to Sydney.
VH-EWB passed through Mackay Airport heading North on Wednesday 24 February - see Blog post below!
Meanwhile, also noted visiting Mackay Airport, but late on Thursday 25 February, was Link Airways / Vee H Aviation Cessna 441 VH-VEJ.  It looked arrive from Brisbane and then depart to Newcastle (Williamtown) before the returning to Brisbane.
While up at Hamilton Island Airport, also on Friday 26 February, the familiar sight of FKG Air (Redjet Aviation) Hawker Beechcraft B200GT VH-FKB was back visiting Central Queensland Airports for the third day in-a-row.  It looked to depart from Hamilton Island Airport and call into Bundaberg Airport before heading 'home' to Toowoomba.
As mentioned below, VH-FKB had arrived into the Whitsunday Airport at Shute Harbour on Thursday 25 February from Toowoomba and Archerfield, with it presumably flying across to Hamilton Island Airport later in the day or early on Friday.
Finally, down at Rockhampton Airport, also on Friday 26 February, Piper PA-46-350P Malibu Mirage VH-KNV visited from its Cessnock base in New South Wales.
Raytheon A36 Bonanza VH-YGM arrived once again from its Orange base in New South Wales.
UPDATE!  On Wednesday 3 March, VH-YGM finally departed Rockhampton Airport for Bankstown.
And the Queensland Police Service (Airwing) (State of Queensland) Raytheon B1900D VH-PSK popped into Rocky, looking to arrive from Brisbane and later depart to Townsville.  It had earlier flown down to Brisbane from Cairns and Townsville.
Sincere thanks to local plane spotter 'JM' for taking the time to capture and send through these great photos of a great bizjet visitor to the region this week!
All photos taken by 'JM'  ©
Posted by Damian F at 9:25 PM