On Wednesday 17 February, Brescon (Toowoomba) Beech B200 King Air VH-WXN was finally spotted by me parked at my local Clermont Aerodrome after earlier making its weekly arrival from Toowoomba-Wellcamp. 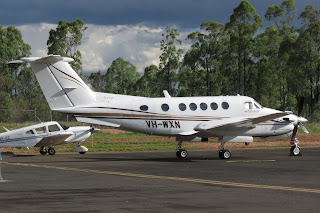 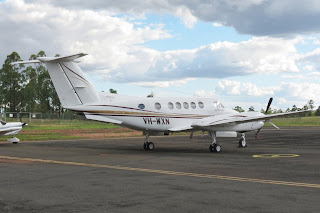 A the time of writing, it is expected to return to Wellcamp early on Thursday 18 February.

Meanwhile, a little earlier, also on Wednesday 17 February, Link Airways / Vee H Aviation Cessna 441 VH-VEJ flew up from Brisbane and looked to call into Glenden before then continuing across to Clermont Aerodrome.  It then flew back to Brisbane.

Finally, also on Wednesday 17 February, Air Gold Coast Beech 58 Baron VH-YDC arrived into Rockhampton Airport from Townsville before it later departed to Kingaroy, Archerfield and the Gold Coast.  It had flown North from the Gold Coast to Townsville via Kingaroy the previous day.
Posted by Damian F at 9:29 PM