On Tuesday 2 February, Queensland Government (QGAir) Rescue (State of Queensland) Agusta AW139 helicopter VH-EZJ was spotted arriving into Rockhampton Airport as it ferried South from Cairns and Townsville to Archerfield. 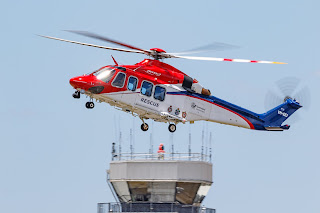 VH-EZJ seems to heading to Archerfield for planned maintenance after operating out of Cairns Airport for a period of time as "Rescue 510".

As we have mentioned previously, this is part of the 'rotational system' the service utilizes to ensure the even distribution of flying hours on each of the QGAir Rescue helicopters. This system avoids the need to have multiple helicopters offline for simultaneous scheduled maintenance.

It will be interesting to see if another QGAir Rescue helicopter ferries North in the coming days to 'replace' VH-EZJ.
UPDATE!  On Thursday 4 February, fellow Queensland Government (QGAir) Rescue (State of Queensland) Leonardo S.P.A. Helicopter (Agusta) AW139 helicopter VH-EGK was spotted as it passed through Rockhampton Airport while ferrying North from Archerfield to Townsville.