Certainly interesting to see that on Wednesday 24 February, a pair of Royal Australian Air Force (RAAF) Alenia C-27J Spartan transport aircraft popped in together to Bundaberg Airport.  They had earlier departed RAAF Base Amberley and flew up low level to complete airwork at Wondai before then flying overhead Gayndah and onwards to Bundy. 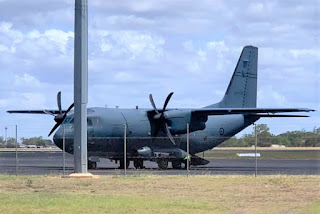 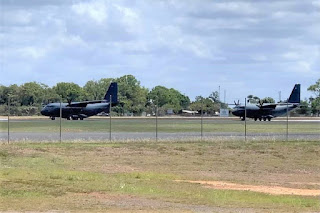 After completing some airwork, both Spartans landed at Bundaberg Airport for a short period of time.
After some time on the ground, the two Spartans departed Bundaberg Airport and again flew at low level to the East to then track down the Eastern side of Fraser Island and then overhead the Sunshine Coast and back to Amberley.
Of interest, both Spartans were heard to be using the single formation callsign of "Mongrel".
As mentioned previously, the Alenia C-27J Spartan is a military transport aircraft developed and manufactured by Alenia Aermacchi. The RAAF has ten C-27J Spartan battlefield airlifters with 35 Squadron based at RAAF Base Amberley after they were ordered by in May 2012 to replace the now-retired De Havilland DHC-4 Caribou fleet.

The RAAF C-27J Spartan aircraft complements the capabilities of the current C-130J Hercules and C-17A Globemaster aircraft and uses common C-130J Hercules infrastructure and aircraft systems such as engines, avionics and the cargo handling systems. They will be equipped with missile warning systems, electronic self-protection and battlefield armour allowing them to operate freely in high-threat environments.
All photos taken by Sophie Crow  ©
Posted by Damian F at 9:02 PM