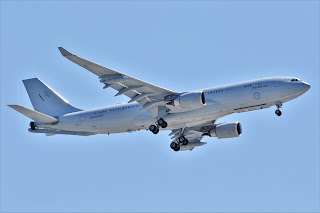 A39-007 looked to fly up from RAAF Base Amberley to complete the airwork at Rockhampton Airport before continuing North and landing at Townsville for a short time.  It then departed North and was spotted (above) completing another missed approach at Cairns Airport before then flying back to Amberley.
Meanwhile, also on Friday 5 February, fellow RAAF Beech B350 Super King Air A32-675 "Beaufort 06" was noted calling into Longreach Airport from ports in the Northern Territory.  It then departed to RAAF Base Williamtown and RAAF Base East Sale.  It appears to have flown into the Northern Territory the previous day.
Of interest, and as posted below, on Monday 1 February, A32-675 (but) as "Beaufort 03" also called into Longreach Airport from East Sale and Williamtown before continuing to the North-West.  It appears to have returned to East Sale the next day.
Photo taken by Jonathan Williams  ©
Posted by Damian F at 8:52 PM