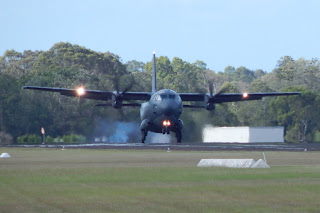 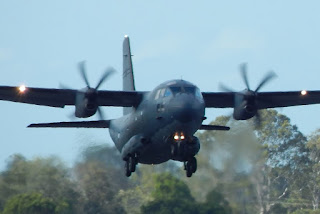 It flew up from RAAF Base Amberley and completed airwork around Gympie before flying up to and being spotted completing some touch-and-go's at Maryborough Airport.  A34-010 reportedly then continued to Bundaberg and Hervey Bay (Fraser Coast) Airports for more airwork before then returning to Amberley.
It also appears that at a similar time, fellow RAAF C-27J Spartan A34-008 as "Wallaby 44" looked to also fly up from Amberley to complete airwork around Fraser Island before flying inland to the Wondai area and back to Amberley.
Sincere thanks David G of Maryborough Aviation Services for taking the time to capture and send through these great photos!
All photos taken by David Geck  ©
Posted by Damian F at 8:30 PM