Early on Monday 1 February, it was noted that (now) former Toll Freight Aviation / Toll Express Metro III VH-UZP was using the flight number and radio callsign of 'SH130' / "Sharp 130" as its flew up from Brisbane to Rockhampton and Mackay Airports before it continued West to Mount Isa.
During the afternoon, VH-UZP then flew back across to Mackay Airport and back to Brisbane as 'SH129' / "Sharp 129".
Reports say change-over is part of a recent deal which has seen Victorian based regional airline Sharp Airlines acquire all Toll Metro flight services/contracts, crews and aircraft.
Sharp Airlines was established in 1990 as an aviation company focused on Australia’s Southeast region.  It is headquartered in the Victorian town of Hamilton. 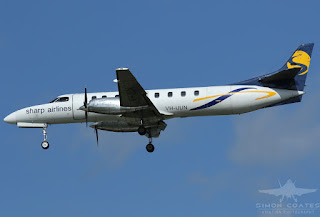 Meanwhile, it has been reported that the two Toll Freight Aviation ATR 43-300F freighters VH-TOQ and VH-TOX will continue to operate but by Airwork under their Air Operator's Certificate (AOC). 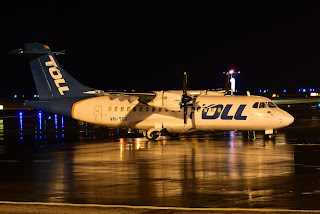 Unofficially, Airwork reportedly intends to contract the ATR operations and crewing out to Hevilift for only one of the two aircraft with the other likely to be scrapped due to a major maintenance layup that is due for the other.
Of interest, the Toll maintenance, repair, overhaul (MRO) department has been acquired by Alliance Airlines which was announced late last year.
Photos taken by Steve Vit, Simon Coates and Michael Malick  ©
Posted by Damian F at 7:02 PM