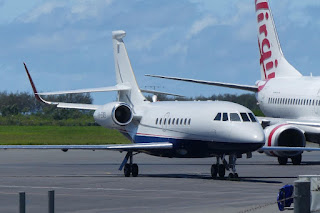 VH-EWB was only delivered to the country into what appears to be its Sydney base in November 2020 all the way over from France.
Of interest, the registration marking is quite familiar to Australian skies having being worn by various commercial aircraft including most recently, a Fokker F-28 Fellowship 4000 operated by Flight West Airlines.
Meanwhile, also on Wednesday 24 February, the Queensland Police Service (Airwing) (State of Queensland) Raytheon B1900D VH-PSK popped into Rockhampton Airport.  It arrived from Cairns and Townsville before later departing back to Cairns.
And Gulf Aircraft Textron Aviation (Cessna) 208 Caravan VH-PYO called into Emerald Airport from Brisbane before later departing to Warrenvale Station (South of Normanton) and then to Donors Hill. 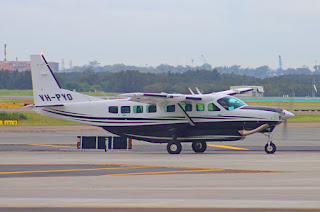 It had flown South at the start of the week and completed a return flight to Chinchilla Airport and back to Brisbane on Tuesday 23 February.
Finally, a couple of familiar King Air turboprops noted visiting Central Queensland Airports, also on Wednesday 24 February, included FKG Air (Redjet Aviation) Hawker Beechcraft B200GT VH-FKB which visited Bundaberg Airport from its Toowoomba base.
While Brescon (Toowoomba) Beech B200 VH-WXN was noted arriving into my local Clermont Aerodrome from Toowoomba-Wellcamp.  It is due to return to Wellcamp early on Thursday 25 February.
Photos taken by 'JM' and Lloyd Fox  ©
Posted by Damian F at 9:05 PM