A surprise arrival into Gladstone Hospital late on Thursday 11 February was LifeFlight Leonardo S.P.A. Helicopters (Agusta) AW139 helicopter VH-XIB.  It appears to have flown in on a medical evacuation flight from the Sunshine Coast and was heard to be using the flight number and callsign of "Rescue 511". 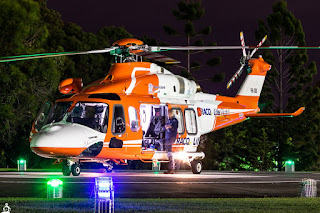 VH-XIB "Rescue 511" then departed to Bundaberg Airport and the Sunshine Coast before landing at the Prince Charles Hospital Heli-pad in Brisbane where it was photographed above.
VH-XIB is one of three recently registered rescue helicopters to join the LifeFlight fleet with the AW139 registered to them in September last year.  It previously operated as in China as B-702T for Shanghai Kingwing General Aviation.
The other AW139 helicopters to join the LifeFlight fleet in recent months have been VH-XIA and VH-XIU.
Photo taken by Tim Burnett  ©
Posted by Damian F at 7:17 PM