On Friday 19 February, Pratt Aviation Bombardier BD-700-1A10 Global Express bizjet VH-VGX was photographed parked at a wet and miserable Mackay Airport, after it had earlier arrived from Townsville. 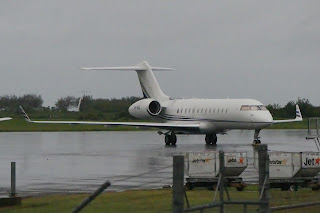 It appears that the Global Express is on a Queensland tour with it originally arriving into Cairns from Melbourne (Essendon) exactly a week ago.
At the time of writing, it appears that VH-VGX is staying at Mackay Airport for at least the night.
UPDATE!  On Saturday 20 February, VH-VGX departed Mackay Airport and called into Gladstone Airport where it again seems to be spending the night - see Blog post above!
UPDATE!  On Sunday 21 February, VH-VGX departed Gladstone Airport for Adelaide.
Meanwhile, another bizjet to be noted visiting the region, also on Friday 19 February, was Australian Country Choice Properties (Brisbane) Cessna 560 Citation V Encore bizjet VH-ACC.  It looked to depart from Brisbane and call into Wellclose before flying to Charleville Airport and then back to Wellclose.
Finally, a couple of light General Aviation (GA) visitors to the region, also on Friday 19 February, included NQ Goldfields Beech 58 Baron VH-SNZ which visited Gladstone Airport from its Charters Towers Aerodrome base.
While the Queensland Police Service (Airwing) (State of Queensland) Raytheon B1900D VH-PSK looked to arrive into Rockhampton Airport from Cairns and later depart to Brisbane.  Later, it flew up to Mackay Airport before then returning to Cairns via Townsville.
Photo taken by 'JM'  ©
Posted by Damian F at 8:23 PM