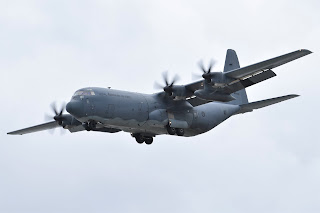 It was flying as "Trojan 33" and looked to originally depart RAAF Base Richmond for Albury and Coffs Harbour.  After departing Coffs Harbour, A97-440 flew North and completed airwork and touch-and-go's at Proserpine (Whitsunday Coast), Townsville (pictured), Rockhampton and Taroom Airports, before it then went on to land at the Ballina / Byron Bay Gateway Airport.
It also appears that the Herc may have completed low-level operations around the Whitsundays.
Photo taken by Graham Aspinall  ©
Posted by Damian F at 8:18 PM