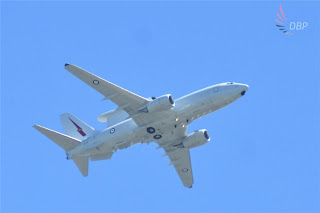 On this occasion, the Wedgetail flew up from RAAF Base Williamtown via a missed approach at the Sunshine Coast to complete a missed approach at Bundaberg Airport. A30-001 then returned South and completed more airwork including multiple missed approaches at Coffs Harbour before then continuing back to Williamtown.
A30-001 was heard to be using the radio callsign of "Wedgetail 01".
Sincere thanks to Dan B from Dan Beck Photography for allowing us to share this great photos!