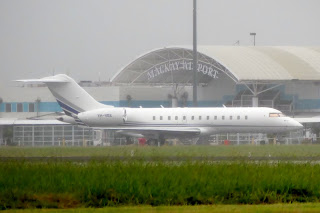 VH-VGX was photographed above and below parked at a wet and miserable Mackay Airport as it prepared for its departure. 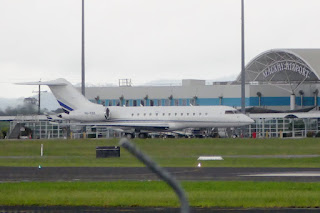 As mentioned below, it appears that the Global Express is on a Queensland tour with it originally arriving into Cairns from Melbourne (Essendon) just over a week ago.

Meanwhile, after arriving there also on the previous day, also on Saturday 20 February, Australian Country Choice Properties (Brisbane) Cessna 560 Citation V Encore bizjet VH-ACC was noted departing Wellclose and flying to Dooloogarah before continuing to Roma Airport.
Finally, also on Saturday 20 February, Brisbane-based Pilatus PC-12/47E VH-AAC (not to be confused with the Citation Encore VH-ACC above!) was noted flying across from Brunette Downs in the Northern Territory to Mount Isa and Archerfield.
All photos taken by 'JM'  ©
Posted by Damian F at 8:56 PM