Just over a week after its previous visit to the region, on Friday 19 February, Royal Australian Air Force (RAAF) Lockheed C-130J-30 Hercules transport aircraft A97-440 was again noted completing airwork and training at some Central Queensland Airports. 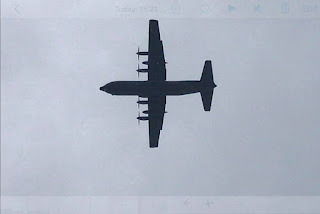 It was flying as "Trojan 54" and looked to originally depart from Hobart in Tasmania before flying all the way up to Townsville.  From Townsville, it then flew down and completed a missed approach at Hamilton Island Airport before then being spotted and videoed completing low-level airwork at a very cloudy and rainy Mackay Airport.
A97-440 was then due to complete further airwork at Rockhampton Airport but encountered a technical problem and ended up flying down to RAAF Base Amberley.
Of interest, A97-440 as "Trojan 33" completed airwork at some CQ Airports last Wednesday 10 February - see Blog post below!
Sincere thanks to local plane spotter 'JM' who was at the right place at the right time and sharing with us the photo and video!
Photo and video taken by 'JM'  ©
Posted by Damian F at 8:10 PM