On Saturday 17 March and for the second time in less than a week, an Australian Army Eurocopter (ARH) Tiger Armed Reconnaissance Helicopter was spotted on the ground at Longreach Airport.  On this occasion, it was identified as A38-008. 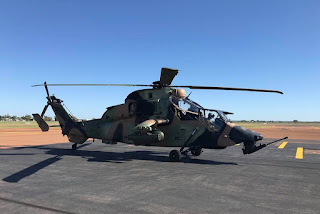 It is believed that the Tiger arrived on Friday 16 March.  A38-008 is pictured shortly before departing Longreach Airport for Oakey.

Sincere thanks to local plane spotter Greg W for sending through this great photo which was captured as he enjoyed a scrumptious breakfast at the Qantas Founders Museum (QFM) at Longreach Airport!