A surprise visitor into Longreach Airport on Thursday 8 March with Careflight (NT) Hawker Beechcraft 400A bizjet VH-EIH  arriving directly from Sydney.  It had arrived into there from its Darwin base via Alice Springs, in the Northern Territory on Wednesday 7 March and is presumably heading 'home'.  It later departed to Darwin and was noted using the flight number and radio callsign of  “Careflight 44”. 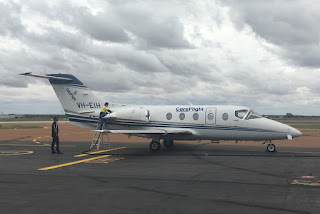 Sincere thanks to local plane spotter Calen H for taking the time to capture and send through this photo of a great visitor to Longreach!