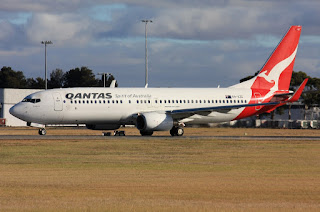 On Sunday 18 March, Qantas Boeing B737-800 VH-VZG was noted operating into Hamilton Island Airport on the scheduled QFA866/867 service from and back to Sydney.

The B737-800 was originally ordered by Qantas back in 2009 and was registered VH-VZG in August of that year.  It was accepted by Qantas in early September 2009 and at that time too, VH-VZG also carried the New Zealand flag and 'ZQB' on the nosewheel doors.

Soon after its arrival into Melbourne, the aircraft entered the New Zealand aircraft register as ZK-ZQB during the middle part of September 2009 with Jetconnect Ltd in Auckland, New Zealand as the registered operator.  After then ferrying to Auckland Airport, ZK-ZQB was named 'Sir William Hudson' and then operated its first Qantas Jetconnect revenue service from Auckland to Sydney as QFA142 on Thursday 24 September 2009.

ZK-ZQB operated its final service for Qantas Jetconnect on Wednesday 7 February when it arrived into Sydney from Christchurch as QFA138.  The aircraft then positioned to Brisbane and was subsequently cancelled from the New Zealand aircraft register and was then re-registered as VH-VZG, again with Qantas as the registered operator.  VH-VZG was also renamed 'Yarralumla'.

After a test flight from and back to Brisbane, VH-VZG entered service with Qantas on Friday 23 February.  VH-VZG is pictured above at Adelaide Airport on Sunday 25 February.