Visiting Emerald Airport once again on Wednesday 28 March was American registered Bombardier BD-700-1A10 Global 6000 bizjet N60XC.  It was noted making a day-trip to Emerald Airport, arriving from and then later departing back to Brisbane.


The sleek bizjet is becoming a semi-regular visitor to CQ having made several visits during different times over the last year or so, including at least three visits to Emerald and Mackay Airports so far in 2018.

Meanwhile, a couple of other corporate bizjet and turboprop aircraft were noted visiting various CQ Airports also on Wednesday 28 March.

Of the corporate turboprop aircraft to visit Central Queensland on Wednesday 28 March, I spotted Brisbane-based Pesca Aviation AeroCommander 690-A Turbo Commander VH-ATF at Clermont Aerodrome.  It had earlier arrived from Archerfield and Bundaberg and looked to continue to Mount Isa. 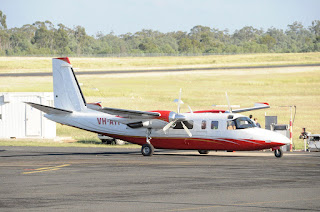 While also noted at Bundaberg Airport on Wednesday 28 March was Pegasus Air (South Australia) Pilatus PC-12/47E VH-JMU which arrived from and later departed back to Bankstown via Sydney and Archerfield, Victorian-registered Partenavia P.68B VH-PNU visited from Archerfield - where it seems to be presently based and Cirrus SR22 VH-VCD arrived from Kingaroy and later departed to Toowoomba.