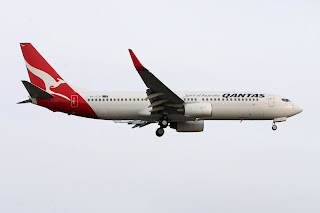 On Friday 30 March, Qantas Boeing B737-800 VH-VZH was noted operating into Hamilton Island Airport on the scheduled QFA870/871 service from and back to Melbourne (Tullamarine).

The B737-800 was originally ordered by Qantas back in 2009 and was registered VH-VZH in September of that year.  It was accepted by Qantas in early October 2009 and at that time too, VH-VZH also carried the New Zealand flag and 'ZQC' on the nosewheel doors.

Soon after its arrival into Melbourne, the aircraft entered the New Zealand aircraft register as ZK-ZQC during the latter part of October 2009 with Jetconnect Ltd in Auckland, New Zealand as the registered operator.  ZK-ZQC was named 'Katherine Mansfield' and then operated its first Qantas Jetconnect revenue service from Melbourne (Tullamarine) to Auckland as QFA25 on Thursday 22 October 2009.

ZK-ZQC operated its final service for Qantas Jetconnect on Thursday 8 March when it arrived into Brisbane from Auckland as QFA124.  The aircraft was subsequently cancelled from the New Zealand aircraft register and was then re-registered as VH-VZH, again with Qantas as the registered operator.

VH-VZH entered service with Qantas on Friday 23 March.  VH-VZH is pictured above arriving into Adelaide on its first day of operations.