Over the last few days, a number of interesting light General Aviation (GA) aircraft have been noted passing through various Central Queensland Airports with at least two of them on ferry flights.

On Sunday 4 March, Airways Corporation of New Zealand Piper PA-42-1000 Cheyenne 400 VH-PFQ flew into Longreach Airport from Darwin (where it is pictured below).  It later departed to Maitland in New South Wales.  VH-PFQ was heard to be flying as 'XFX 1' / "AirCorp02". 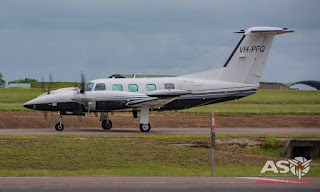 VH-PFQ looks to be returning from survey flying in South-East Asia.  It had touched down at Darwin from Denpasar (Bali) on Saturday 3 March.

Meanwhile, late on Saturday 3 March, Sydney Skydivers Cessna 208 Caravan VH-XLV passed through Mackay Airport while on a ferry flight from Innisfail to Bankstown. 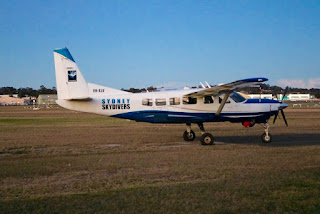 It had only just flown North from Bankstown at the start of last week.  It appears that VH-XLV was operating - and has already re-commenced operations - at Wilton Airfield near Sydney in New South Wales.

Also passing through Mackay Airport but on Friday 2 March was 1959-build Cessna 180B VH-WIT which arrived from Cairns and departed to the Pacific Haven Airpark near Hervey Bay.

At the time of writing, the Twin Otter is scheduled to operate into Middlemount Aerodrome again early on Monday 5 March, departing Maryborough for Middlemount and then returning to Gladstone Airport.