On Monday 12 March, Brisbane-based Cessna 525A CitationJet2 bizjet VH-MOR was yet again back in CQ, noted completing airwork around Gayndah, Biloela / Thangool, Gladstone (where it is pictured below) and Bundaberg Airports while on what appeared to be another training flight from and back to its Archerfield base.  It is unclear whether it actually landed at any of these Airports or simply completed airwork. 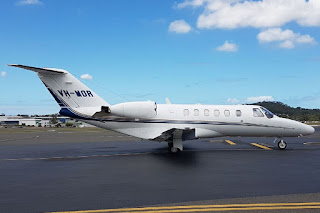 Meanwhile, also visiting CQ once again on Monday 12 March was LifeFlight (Aeromed) LearJet 45 bizjet VH-VVI which also looked to complete a training flight but into Gladstone Airport.  Again, it is unclear if the LearJet actually landed, but it flew up from and returned to its Brisbane base.

Finally, late on Monday 12 March, locally-based Embraer EMB-550 Legacy 500 bizjet N142GZ returned to Mackay Airport from Sydney after flying down there back at the start of February.