Another Busy Week for Local Bizjets Around Central Queensland Airports

It's been another busy week for Australian-based bizjets, with quite a number visiting various Central Queensland Airports this week.

Local resident bizjet Raytheon 390 Premier 1 N7088S has had a busy week - after departing Mackay for Rockhampton, Archerfield and Bankstown last Friday 5 April, N7088S returned to Mackay via Archerfield and Rockhampton on Wednesday 10 April.  Don W caught N7088S as it passed through Rockhampton.


Then on Thursday 11 April, N7088S flew from Mackay to Cairns and back, while on Friday 12 April, it departed Mackay for Brisbane.

Another local bizjet in the form of J.M. Kelly (Project Builders) Cessna 550 Citation II VH-JMK departed its Rockhampton base for Brisbane on Friday 12 April.


Interestingly, information suggests that VH-SQW (pictured above at Rockhampton AIrport last year) was to operate into Rockhampton and Mackay on Wednesday 10 April as "Raffles 111", but returned to the Sunshine Coast shortly after departure.

While I visited Emerald Airport on Thursday 11 April, I spotted Flight Options (Australia) (Aeromil Pacific) Cessna 560 Citation Ultra VH-SJP parked on the Western General Aviation Apron.  It had arrived on Tuesday 9 April, and evenutally departed to the Sunshine Coast on Friday 12 April. 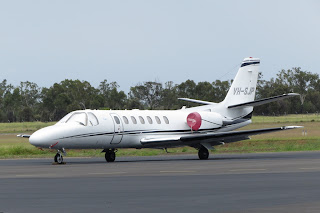 Lastly, the bizjet action at Hamilton Island continued to power along.  As we mentioned previously, Brenzil Dassault Falcon 2000EX VH-CRW arrived into Hamo from Brisbane on Saturday 6 April.  It departed back to Brisbane on Tuesday 9 April.

Also on Tuesday 9 April, Cessna 680 Citation Sovereign VH-VPL arrived from the Gold Coast and Sydney.  It departed back to the Gold Coast on Friday 12 April.

Lastly, on Thursday 11 April, a pair of (becoming) familiar bizjet visitors in the form of Balmoral Air Dassault Falcon 2000EX VH-WIO and Shortstop Jet Charter British Aerospace BAe-125-1000B VH-LMP both visited Hamilton Island - VH-WIO flew from and back to Bankstown - VH-LMP flew from and back to Melbourne (Essendon).
Posted by Damian F at 11:09 PM