A Couple More Photos from Gladstone Airport Over the Weekend

Gladstone Plane Spotter Michael F loves his hobby, but unfortunately has been so busy that he has rarely been able to get to Gladstone Airport over the last couple weeks.  He did manage find a bit of time over the weekend, and kindly shares with us some photos of some interesting visiting helicopters and fixed-wing aircraft he captured at Gladstone Airport.

Fellow HeliReef Bell 206 VH-CKP is also reportedly based at Gladstone Airport at the present time.

A late arrival into Gladstone Airport on Saturday 13 April was Wagners Development Company Hawker Beechcraft B300 Super King Air VH-WJW which touched down from its Toowoomba base just after the sun went down.

I think Michael managed to capture a lovely low-light image of VH-WJW as it taxiied to its parking position for the night.  After staying the night, VH-WJW returned to Toowoomba on Sunday 14 April. 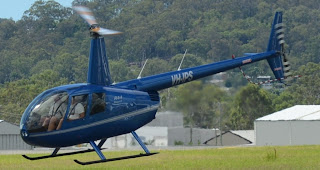 This very smart looking little aircraft arrived from Toowoomba during the morning, and later departed to Archerfield.

A big thank you to Michael for sharing his fantastic images!

All photos taken by Michael Fleetwood  ©
Posted by Damian F at 8:08 PM