It was interesting to note that over the weekend it appeared that as many as three aircraft operated by Archerfield Airport-based Flight One Professional Charter and Flight Training services looked to fly into Longreach Airport at various times. 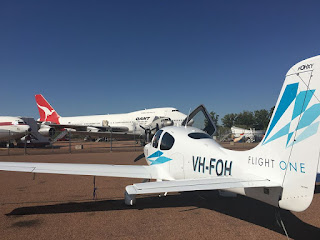 As shown above from their Facebook page (https://www.facebook.com/Flight-One-262270403155/) it certainly appears that their Cirrus SR22 VH-FOH was at Longreach Airport over the weekend on what appeared to be a navigational exercise.

A well-known flight tracking website also indicates that Flight One's Beech B200 King Air VH-FON called into Longreach Airport on Monday 29 February.  It appears that VH-FON also called into Emerald Airport on Sunday 28 February before flying on to Mount Isa and Newcastle Waters in the Northern Territory.  VH-FON then returned to Archerfield on Monday.

Finally, Cessna 182 also of Flight One looked to possibly call into Longreach Airport on Saturday 27 February before departing to Roma.

To learn more about Flight One Professional Charter and Flight Training check out their website:  http://www.flightone.net.au/
Posted by Damian F at 10:08 PM