Back in CQ once again on Monday 15 February was the Earth Commodities Cessna 550 Citation Bravo bizjet VH-CCJ. 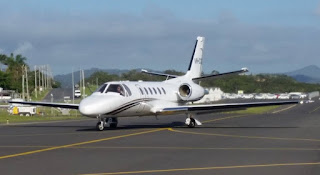 As per usual, it initially flew North from Brisbane and touched down at Gladstone - where it was spotted by Col. 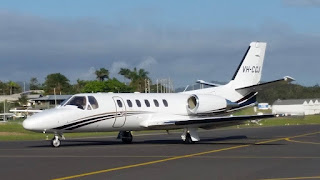 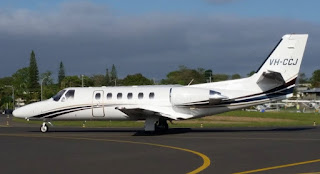 From Gladstone, VH-CCJ continued further North to Mackay before touching the down at Rockhampton around lunch time.

Local plane spotter Kayanne H was on hand to capture a couple more photos of VH-CCJ during its visit.

After dropping off passengers, VH-CCJ departed to Gladstone where it was due to spend the night.

At the time of writing, VH-CCJ is due to depart Gladstone for Bundaberg fairly early on Tuesday 16 February.

Sincere thanks to Col and Kayanne for taking the time to capture and send through these great photos of a beaut little bizjet that is always a welcome visitor to CQ!

Photos taken by Col and Kayanne Hardsman  ©
Posted by Damian F at 9:07 PM