Another nice locally based bizjet that appears to have called into Hamilton Island Airport both on Saturday 13 February and again on Sunday 14 February was Marcplan Charter Gulfstream G-IV-X (G450) VH-MBP. 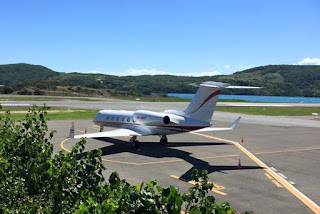 It appears that on Saturday, VH-MBP flew into Hamilton Island Airport from Melbourne (Essendon) and Sydney.  It later returned to Sydney.  Then on Sunday, VH-MBP again touched down at Hamo again from Sydney.

UPDATE!  It appears that VH-MBP remained on Hamo on Sunday night and departed back to Sydney on Monday 15 February.

Sincere thanks to Kevin P for sharing this great photo!