Much to my surprise, Torres Strait Air AeroCommander 500-S VH-EXC called back into Rockhampton Airport on Friday 19 February, this time heading home to Cairns following a reported 100-hour service at Archerfield. 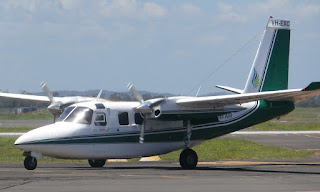 VH-EXC had flown South on Monday 15 February - more great photos of its visit were posted HERE.

Meanwhile, also calling into Rockhampton Airport on Friday 19 February was Wolff Aviation Hawker Beechcraft C90GTi VH-VWG which called in from Moranbah and later departed to its Toowoomba base.

And the Queensland Police Service (Airwing) Raytheon B1900D VH-PSK was also noted at Rocky - and other places - on Friday 19 February after a period of time seemingly 'offline' at Cairns.