Making another surprise visit at Rockhampton Airport on Saturday 27 February was American registered and privately operated LearJet 36A bizjet N82GG. 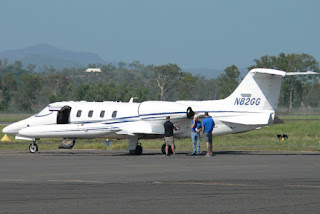 Local plane spotter Don W was at the right place at the right time and captured this great photo as it parked on the Rockhampton Airport General Aviation (GA) Apron.  It later departed to Sydney.

N82GG visited Rocky in October 2015 and it was noted that the LearJet has a camera on the forward-starboard side of the fuselage.  There are reports that the aircraft is operating aerial mapping sorties for Nearmap - the international provider of high resolution aerial imagery.

Meanwhile, another bizjet to call into Rockhampton Airport this week - Light Jets Australia Cessna 525 Citation CJ1 bizjet VH-TFW - departed to its Archerfield base on Friday 26 February.  It had arrived on Wednesday 24 February from Biloela/Thangool Airport where it arrived on Monday 22 February.

Thanks Don for capturing and sending through these great photos of a beaut little LearJet!