On Friday 12 February, Royal Australian Air Force (RAAF) Boeing C-17A Globemaster III A41-212 was noted operating yet another training flight from RAAF Base Amberley.  On this occasion, it noted flying at low level up the Central Queensland coast before local plane spotter Kayanne H captured a quick photo of the Globemaster climbing out after conducting a missed approach at Rockhampton Airport. 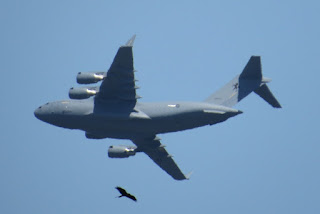