On Thursday 16 July, re-registered Jampair P/L Embraer EMB-505 Phenom 300E bizjet VH-NSQ was noted calling into Proserpine (Whitsunday Coast) Airport.  It looked to arrive from Bankstown via the Sunshine Coast - where it is pictured visiting on Wednesday 15 July. 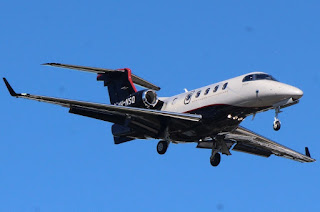 After a short time on the ground, VH-NSQ departed Proserpine Airport and returned to Bankstown.

Meanwhile, after arriving at the start of the week, the often visiting American-registered Eclipse EA500 bizjet N257AK was noted departing the Whitsunday Airport at Shute Harbour for Archerfield, also on Thursday 16 July.

And also on Thursday 16 July, several light aircraft called in to Rockhampton Airport on their way North from Archerfield to the Whitsunday Airport at Shute Harbour.

Out West, also on Thursday 16 July, Brescon (Toowoomba) Beech B200 King Air VH-XDW was noted arriving into Emerald Airport after spending the night at Labona Station Airstrip within Adani Australia's Carmichael Coal Mine site.  It then departed to Toowoomba-Wellcamp.  It had arrived directly into Labona from Wellcamp on Wednesday 15 July.

Sincere thanks to the Sunshine Coast Plane Spotting Facebook page for allowing us to share their great photo of VH-NSQ!
Posted by Damian F at 8:31 PM