After heading North the previous day and as expected, on Thursday 16 July, Royal Australian Air Force (RAAF) Boeing B737-7DF(BBJ) A36-001 called into Rockhampton Airport while heading back to Canberra on what appears to be a training flight. 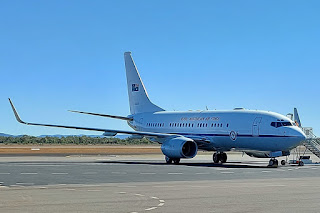 The RAAF BBJ started the day at Townsville and firstly completed airwork at Proserpine (Whitsunday Coast) Airport before it headed to Rocky.  After completing a spectacular 'late' missed approach, A36-001 landed and parked at Rockhampton Airport for a short period of time. 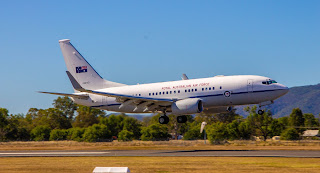 A36-001 then departed Rockhampton Airport for the Gold Coast and then Tamworth before it then returned to Canberra. 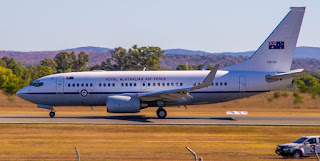 As mentioned, A36-001 flew North on Wednesday 15 July and completed airwork at Bundaberg, Hamilton Island and Cairns Airports before ending the day at Townsville.  As it did on its way North, A36-001 was using the radio callsign of "Envoy 13" again on its trip South.

All photos taken by Michael Malick  ©
Posted by Damian F at 7:58 PM