Over the last couple of days, Vanderfield Pilatus PC-12/47 VH-WPH has been noted visiting a couple Central Queensland Airports.  As shown below, on Friday 3 July, VH-WPH was spotted visiting Bundaberg Airport.  It arrived from Biloela / Thangool Airport and later departed to its Toowoomba base. 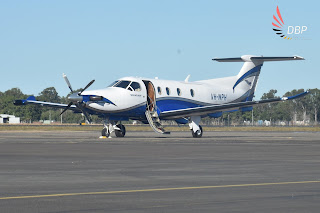 On Wednesday 1 July, VH-WPH flew into Emerald Airport from Toowoomba before then continuing to Mackay and Biloela / Thangool Airports on Thursday 2 July.

Fellow Vanderfield Cessna 210N VH-JSC has also been noted visiting some CQ Airports over the last week or so.  On Tuesday 30 June it looked to fly into Longreach Airport from Toowoomba.  Then on Wednesday 1 July, VH-JSC was noted visiting Charleville and Roma Airports.

Meanwhile, another PC-12/47E VH-MDH was noted visiting Barcaldine Airport on Friday 3 July.  It then departed to its Cloncurry base.

Back in the Wide Bay region, also noted visiting Maryborough Airport but this week on Thursday 2 July was Seair Pacific (Istlecote) Cessna 208 Caravan VH-TQW which arrived from Wanella Station (near Coppabella) on a Fly-in Fly-out (FIFO) closed charter flight.  It had earlier flown up from Rockhampton Airport and then departed to Hervey Bay (Fraser Coast) Airport.

While also on Wednesday 1 July, Seair Pacific (Istlecote) DHC-6-100 Twin Otter VH-ZKF completed its weekly run from the Gold Coast and Brisbane to Rockhampton Airport before flying up to Collinsville Airport and then Townsville.  It then returned South over the same route.

Another Seair Pacific (Istlecote) Textron Aviation (Cessna) 208B Caravan VH-TLH was noted arriving into Longreach Airport on Tuesday 30 June from the Gold Coast and Texas.  It departed to Lady Elliot Island Airport the Gold Coast on Thursday 2 July.

And one other Seair Pacific (Istlecote) Cessna 208 Caravan VH-LMZ was noted arriving into Emerald Airport from the Gold Coast late on Friday 3 July.

UPDATE!  On Saturday 4 July, VH-LMZ looked to complete four local flights out of, around and back to Emerald Airport.
UPDATE!  As at the end of July, VH-LMZ was re-registered to Central Highlands Aerial Services (CHAS) which is based at Emerald.