On Wednesday 15 July, it is believed that Seair Pacific / Istelcote De Havilland DHC-6-100 Twin Otter VH-BVS made its first visit to Rockhampton Airport.  It was operating the weekly Fly-in Fly-out (FIFO) closed charter flight from the Gold Coast and Brisbane to Rocky then up to Collinsville Aerodrome and Townsville.

Meanwhile, on Tuesday 14 July, Regional Express (REX) SAAB 340B VH-ZRB was spotted departing Rockhampton Airport.  It had earlier arrived from Brisbane as RXA9882 on the weekly closed FIFO charter flight which then departs to Richmond as RXA9282. 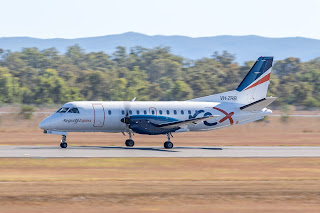 VH-ZRB later returned to Brisbane but as RXA9883.

While also on Tuesday 14 July, fellow REX SAAB 340B VH-ZLG also flew to Richmond but from Brisbane as PFY9280.  It later called into Emerald Airport for fuel before continuing to Brisbane but as PFY9881.

And also this week at Rockhampton Airport, after arriving last Friday 10 July, Hinterland Aviation Cessna 208B Caravan VH-LZK has been noted operating 1-2 daily FIFO charter flights from Rockhampton Airport to the Labona Station Airstrip within Adani Australia's Carmichael Coal Mine site and back.

While also on Wednesday 15 July, Hinterland Aviation Cessna 310R VH-TFY was noted also visiting Rockhampton Airport, arriving from Cairns as HND400 and is due to return there as the same early on Thursday 16 July.

Finally, out at my local Clermont Aerodrome, also on Wednesday 15 July, Corporate Air  / Vee H Aviation Cessna 441 VH-VEJ made its second visit for the week, this time arriving from Brisbane and departing to Roma Airport.  It appears that VH-VEJ then continued to Brisbane before flying back up to Rockhampton Airport and then Emerald Airport where it is spending the night.