Making a rare weekend appearance at CQ Airports on Saturday 18 July was Royal Australian Air Force (RAAF) Dassault Falcon 7X bizjet A56-001.  It was spotted at Gladstone Airport after it had earlier arrived from Townsville and Proserpine (Whitsunday Coast) Airports. 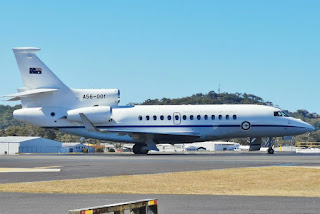 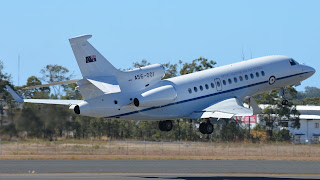 The sleek bizjet which is flown by the RAAF's VIP 34 Squadron was returning South on a training flight after it had flown up from Canberra to Townsville via Coffs Harbour, Bundaberg, Hamilton Island and Cairns Airports the previous day.

After around an hour on the ground, A56-001 "Envoy 17" was noted departing Gladstone Airport for the Gold Coast, Tamworth and then Canberra.

All photos taken by Michael Fleetwood  ©
Posted by Damian F at 9:18 PM