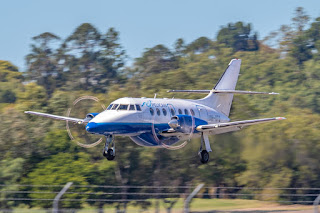 After taking on fuel, VH-OTQ was then noted departing Rockhampton Airport for Julia Creek and Hughenden before it later returned to Rocky as PE998/9.

At the time of writing, it appears that VH-OTQ was spending at least the night at Rockhampton Airport.

Meanwhile, another closed charter flight photographed as at Rockhampton Airport also on Tuesday 28 July was the weekly visit by a Regional Express (REX) SAAB 340B.  This week, VH-ZLQ was spotted as it arrived from Brisbane and then later departed to Richmond as RXA9882/9282.  VH-ZLQ later returned to Brisbane but as RXA9883. 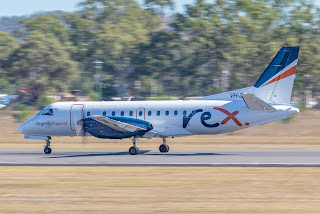 While also on Tuesday 28 July, fellow REX SAAB 340B VH-ZRI called into Emerald Airport, flying from and back to Brisbane as PFY9272/3 before it then flew from Brisbane to Richmond and back, again via Emerald Airport but as PFY9280/9881.