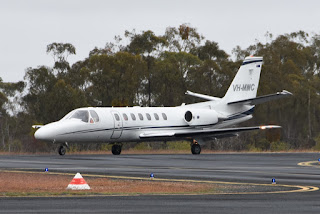 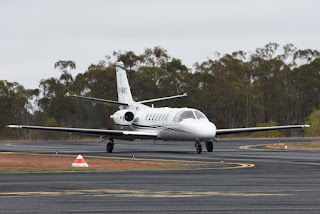 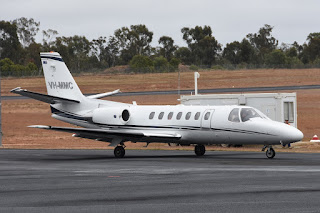 The sleek Citation bizjet flew up from its Sunshine Coast base and needed a couple of attempts at landing due to the low cloud hanging around Clermont.

After staying for most the day, VH-MMC returned to the Sunny Coast during the later part of the afternoon.

Meanwhile, also photographed by me at my local Clermont Aerodrome, also on Thursday 23 July, was Hinterland Aviation Cessna 208 Caravan VH-TFS.  It arrived direct from Rockhampton Airport as HND310 and collected the passengers off VH-MMC to transport them up to the Labona Station Airstrip within Adani Australia's Carmichael Coal Mine site.  It soon departed up there as HND3101 before later returning to Clermont Aerodrome from Labona but as HND331. 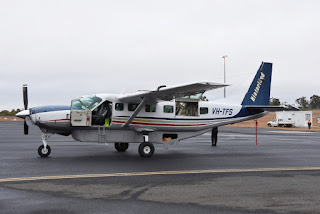 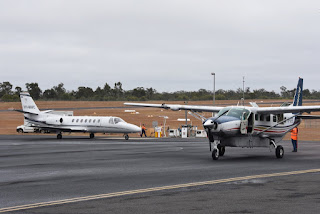 VH-TFS then returned to Rockhampton Airport also during the after but as HND3311.

Meanwhile, on Wednesday 22 July, aside from the regular Hinterland Aviation Fly-in Fly-out (FIFO) charter flights into Labona Airstrip from both Rockhampton and Townsville Airports, there was a trio of other light General Aviation (GA) aircraft to be noted calling in.

Redjet Aviation Piper PA-31 Navajo VH-PJU flew into Labona from Toowoomba before it then flew down to Emerald Airport and returned to its Toowoomba base.  While Brisbane-based Piper PA-31-350 VH-RPV was noted arriving into Labona from Archerfield before it too departed to Emerald Airport before returning to its Archerfield base.

And Brescon (Toowoomba) Beech B200 King Air VH-XDW flew into Labona from Toowoomba-Wellcamp and Emerald Airport before returning direct to Wellcamp early on Thursday 23 July.

Finally, it's worth noting that on Wednesday 22 July, Seair Pacific / Istelcote De Havilland DHC-6-100 Twin Otter VH-BVS was back in CQ operating the weekly Fly-in Fly-out (FIFO) closed charter flight from the Gold Coast and Brisbane to Rockhampton Airport then up to Collinsville Aerodrome and Townsville.  VH-BVS later returned South over the same route.