On Monday 13 July, an unusual visitor to Emerald Airport was spotted in the form of Corporate Air  / Vee H Aviation Metro 23 VH-VET.  It looked to arrive from Brisbane. 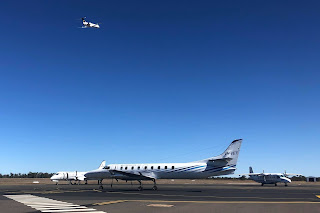 It was reported that fellow Corporate Air  / Vee H Aviation SAAB 340B VH-VEM, which is shown in the background, having also earlier arrived from Brisbane, encountered a technical problem and the Metro 23 VH-VET was sent to Emerald Airport as a replacement aircraft on the usual weekly Fly-in Fly-out (FIFO) charter run.

Indeed a little later, VH-VET departed Emerald Airport for Mackay Airport before returning to Brisbane - as one of the SAABs usually does each Monday.

VH-VEM returned to Brisbane from Emerald Airport later in the day.