On Monday 6 July, it was noted that Qantas Airways started flying double daily weekday flights between Brisbane and Mackay Airport. The morning QFA985/986 service from and back to Brisbane has been joined by an early afternoon QFA987/988 flight. 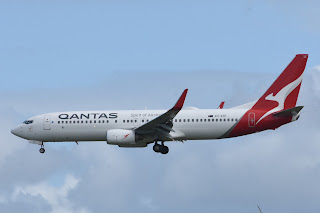 The airline had re-started mainline flights with their Boeing B737-800 aircraft for the first time in over a decade only two weeks earlier.

It is believed that Qantas' decision to select Mackay for increased passenger capacity is a worthy reflection of the growing demand for flights, and the economic prosperity that exists within the Mackay region.

Qantas also appears to be running at least one QantasLink-operated Dash-8-Q400 flight also from Brisbane and also from Cairns and Townsville to Rockhampton Airport.  Their low-cost subsidiary, Jetstar Airways, is also operating one Airbus A320 daily flight between Mackay Airport and Brisbane.

Pictured above is Qantas Boeing B737-800 VH-VZM arriving on Wednesday 8 July while I happened to be in town!
Posted by Damian F at 12:55 PM