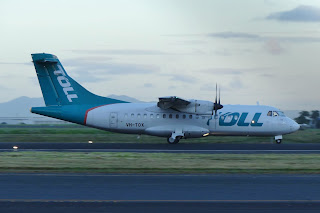 After less than an hour on the ground, VH-TOX departed Mackay Airport and indeed continued to Townsville again as TFX6.

The Toll ATR freighters usually fly direct between Brisbane and Townsville in the early morning and then in the evening with the occasional diversion to Mackay Airport.  Research reveals there have been two visits also into Mackay Airport early on Wednesday 24 June and Wednesday 17 June.

There has also been a regular weekly stop at Rockhampton Airport on a Friday evening which started in April - except for the last two weeks with the TFX5 service from Townsville to Brisbane stopping in at Cairns and then Mackay Airport respectively.