On Friday 17 July, Royal Australian Air Force (RAAF) Dassault Falcon 7X bizjet A56-001 was noted in the skies of Central Queensland, completing what looked to be a training flight out of Canberra. 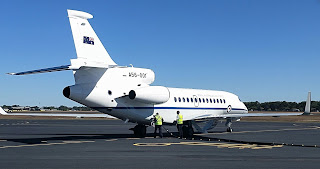 It was heard to be flying as "Envoy 17" and was photographed above and below at Bundaberg Airport after it had earlier arrived from Canberra and Coffs Harbour. 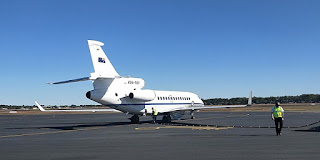 After a short time on the ground, A56-001 departed for Hamilton Island Airport before eventually completing a missed approach at Cairns and then landing at Townsville where it appeared to be spending the night.

This is the second training flight this week by a RAAF VIP 34 Squadron aircraft, with Boeing B737-7DF(BBJ) A36-001 "Envoy 13" completing the same flight over the previous two days.

It is assumed that A56-001 will call into Proserpine (Whitsunday Coast) and Rockhampton Gladstone Airports on Saturday 18 July on its journey back South.

UPDATE!  On Saturday 18 July, A56-001 "Envoy 17" indeed popped into Proserpine Airport but it then flew down to Gladstone Airport where it landed for a short time - see Blog post below!

Sincere thanks to the local plane spotter Peter S for taking the time to capture and send through these great photos!

All photos taken by Peter Sajko  ©
Posted by Damian F at 9:44 PM