On Wednesday 15 July, Royal Australian Air Force (RAAF) Boeing B737-7DF(BBJ) A36-001 was noted in the skies of Central Queensland, completing what looked to be a training flight out of Canberra. 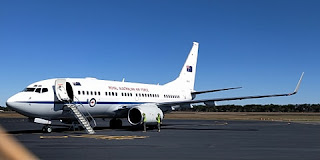 It was heard to be flying as "Envoy 13" and was videoed and photographed as it arrived into Bundaberg Airport from Canberra and Coffs Harbour.

After a short time on the ground, A36-001 departed for Hamilton Island Airport before eventually completing a missed approach at Cairns and then landing at Townsville where it appeared to be spending the night.

As with previous training flights by the RAAF's VIP 34 Squadron BBJs, it is assumed that A36-001 will call into Proserpine (Whitsunday Coast) and Rockhampton Airports on Thursday 16 July on its journey back South.

Sincere thanks to the local plane spotters for allowing to share these great photos and videos of the BBJ's visit to Bundaberg Airport!

Photos and video taken by Dan B, Jacob Jasch and Peter Sajko  ©
Posted by Damian F at 9:45 PM