On Wednesday 15 July, Chinese-registered Learjet 36A bizjet B-4185 popped into Longreach Airport.  It appears to be heading 'home' from Sydney after completing a long period of heavy maintenance, including a re-paint. 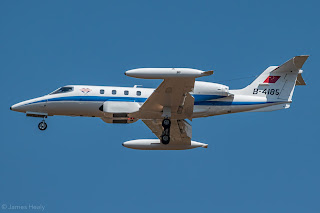 After taking on fuel, B-4185 continued to Darwin where it is pictured arriving above and where it appears to be spending the night.

B-4185 had arrived into Sydney back in September 2019 for some heavy maintenance with Execujet which reportedly took until mid January to complete. It then spent some time at Wagga Wagga where it was re-painted.

Of interest, it appears that B-4185 has previously operated for the Chinese Government / The People's Liberation Army Air Force (PLAAF) as a spy plane.  Note the large camera pod on the Port side of the forward fuselage!

Sincere thanks to Darwin-based plane spotter James H for allowing us to share his great photo of a nice little bizjet!