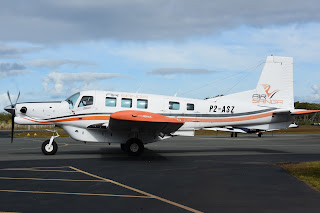 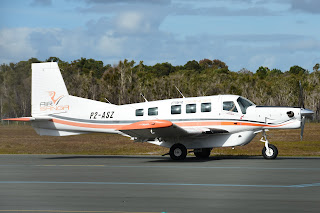 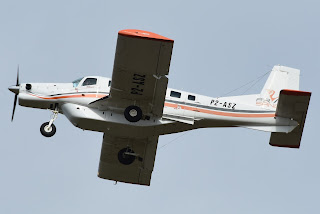 It arrived from Caloundra and later departed to Cairns.
UPDATE!  On Monday 28 June, P2-ASZ continued from Cairns and returned to PNG.
Of interest, P2-ASZ was involved in a landing accident in PNG in October 2019. During the landing at Efogi Airstrip, the aircraft was affected by a tailwind gust, and the aircraft’s nosewheel impacted the up slope of the airstrip. The nose landing gear, cargo pod, engine and propeller were substantially damaged. The seven occupants were uninjured.
The aircraft was subsequently removed from the airfield and freighted to Caloundra on the Sunshine Coast where the aircraft was re-built.  It is pictured above at Caloundra carrying out post-maintenance checks and a test flight prior to its departure North.
Meanwhile, a couple of bizjets to be noted at Central Queensland Airports, also on Friday 25 June, included Gulf Coast Aviation Cessna 510 Citation Mustang bizjet VH-KXM which popped into Roma Airport while flying from Bankstown and Goulburn up to Cairns.
While Australian Corporate Jet Centres Cessna 560 Citation Ultra VH-WFE visited Bundaberg Airport from its Melbourne (Essendon) base.
Sincere thanks to the Sunshine Coast Plane Spotting Facebook page for allowing us to share these great photos of P2-ASZ at Caloundra Airport!
Posted by Damian F at 9:22 PM